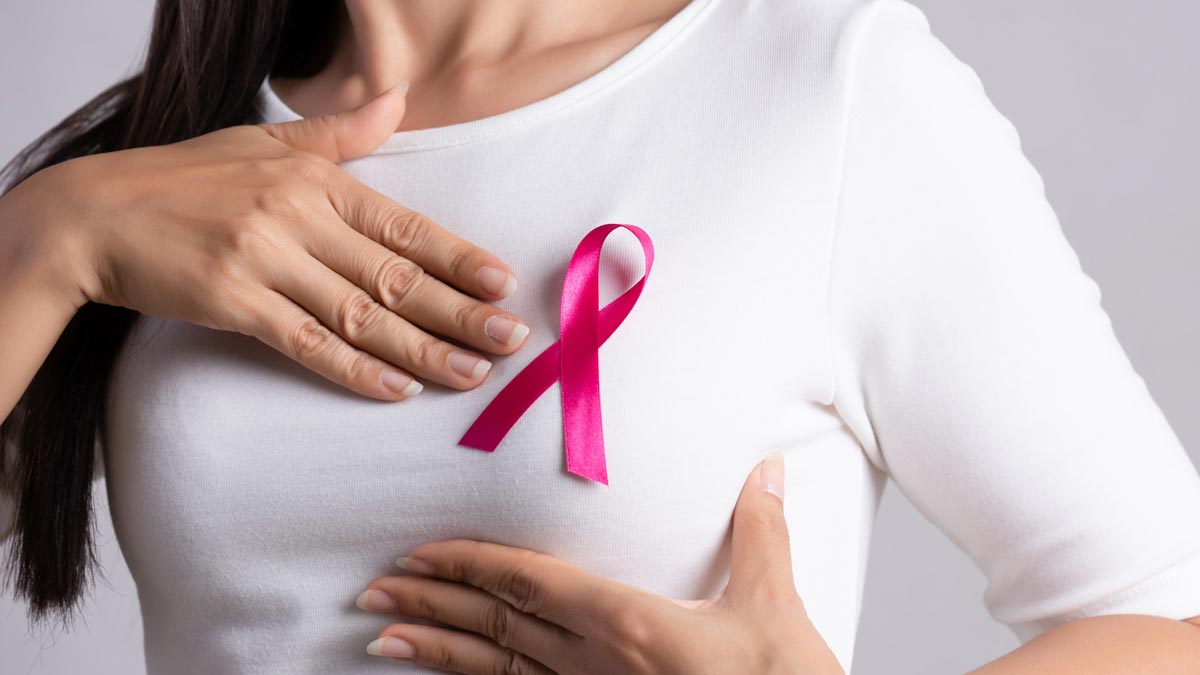 Breast cancer develops when cells in the breast multiply and expand out of control, resulting in a lump of tissue known as a tumour. The symptoms of Breast cancer may include noticing a change in breast size, feeling a lump or changes to the skin around the breasts. Early detection can be aided by mammograms.

What is Breast Cancer?

Breast cancer originates in your breast tissue. The mutation and abnormal growth of breast cells triggers the production of a mass of tissue. Just as other types of cancer, Breast cancer can spread to the tissue surrounding your breast. Additionally, it might spread to other areas of your body, developing new tumours.

Who is Mainly Affected by Breast Cancer?

Breast cancer is one of the most common cancer types in women, second only to skin cancer. Men can also develop breast cancer in unlikely scenarios. Male breast cancer affects about 2,600 males annually in India, accounting for less than 1% of total cases.

What are the Types of Breast Cancer

Breast cancer comes in a variety of forms. The kind of cells in the breast that are impacted determines the type. The majority of breast malignancies are carcinomas. Since the tumours begin in the gland cells in the milk ducts or the lobules, adenocarcinomas are the most prevalent types of breast cancer, including ductal carcinoma in situ (DCIS) and invasive carcinoma (milk-producing glands). Angiosarcoma and sarcoma are two other cancer types that can develop in the breast but are not called breast cancer since they begin in separate breast cells.

Additionally, distinct types of proteins or genes that each tumour may produce are used to categorise breast tumours. Breast cancer cells are examined for the HER2 gene or protein as well as oestrogen and progesterone receptors after a biopsy. To determine the grade of the tumour, the tumour cells are also examined carefully in the laboratory. The particular proteins discovered and the tumour grade can be used to determine the cancer's stage and available treatments.

Other, less common types of breast cancer include:

Your treatment choices and overall prognosis are influenced by the type of cancer you have.

Because cells impede the lymph nodes around the breasts in this condition, the lymphatic capillaries in the breast cannot drain properly. Instead of resulting in a tumour, IBC causes your breast to enlarge, get red, and feel extremely warm. Your breast may have thick, pitted skin that resembles an orange peel.

IBC is known for being forceful and moving quickly. Because of this, it's imperative to contact your doctor as soon as you notice any symptoms.

It only affects 10 to 15 percent of those who have breast cancer (ACS).

A tumour exhibiting all three of the following traits is classified as triple-negative breast cancer:

• It lacks human epidermal growth factor receptor 2 (HER2) proteins: Its surface is devoid of any extra HER2 proteins. Breast cancer is encouraged to spread by a protein known as HER2.

Because hormone therapy for breast cancer is ineffective, triple-negative breast cancers are challenging to treat.

What are the Breast Cancer Stages

Doctors divide breast cancer into several stages based on the size of the tumour and how far it has progressed.

Tumours that are huge or have spread to nearby tissues or organs are at a later stage compared to those that are tiny or remain contained within the breast. Doctors must be aware of the following in order to stage breast cancer:

The five stages of Breast cancer include: Stages 0 to 4.

DCIS is stage 0. In Stage 0, the cancer cells reside in the breast's ducts without invading any adjacent tissue.

Tumors in stage 4 breast cancer can be of any size. Along with distant organs, its malignant cells have also infected local and distant lymph nodes.

The findings of the tests your doctor does to determine the stage of your breast cancer will have an impact on your therapy.

The tissue of men's breasts can develop cancer, known as male breast cancer. Breast cancer can affect men, despite the fact that it is typically associated with women.

Male breast cancer can afflict males of any age, but older men are more frequently affected.

The likelihood of a successful therapy increases with early discovery of male breast cancer in men. In order to remove the breast tissue, surgery is frequently performed as a method of treatment. Additional treatments, like as chemotherapy and radiation therapy, may be advised based on your unique circumstances.

Signs and Symptoms of Breast Cancer

A mammography can often detect an anomaly even when a tumour is too small to be felt when Breast cancer may go undetected in its early stages.

The initial indication of a tumour, if one can be felt, is typically a new lump in the breast that wasn't there before. But not every lump is cancer.

A number of symptoms can be brought on by various breast cancer types. The following signs symbolize the most prevalent breast cancers:

Breast cancer is not always the cause of these symptoms even if one experiences any of the above signs. For instance, a lump or pain in the breast could be caused by a benign cyst.
But if you find a lump in your breast or have other symptoms, schedule a visit with your doctor for extra examination and testing.

Breast cancer develops when abnormal cells in your breast multiply and enlarge. However, experts are unaware of the exact event that started this process in the first place.

There are, however, a variety of risk factors that could increase your risk of developing breast cancer, claims the study. These include:

Multiple other variables can increase the risk of acquiring breast cancer. Find out if you're at danger by speaking with your healthcare practitioner.

How is Breast Cancer Diagnosed?

Your doctor will check your breasts and enquire about your family history, medical history, and any current symptoms in addition to performing the breast exam. Additionally, your doctor will advise testing to look for abnormalities in your breasts. These tests could consist of:

Your healthcare provider might do a breast tissue biopsy if they notice anything worrisome on the imaging tests. The sample will be sent to a pathology lab for analysis.

There are many breast cancer treatments available, including surgery, chemotherapy, radiation therapy, hormone therapy, immunotherapy, and targeted drug therapy. What's best for you will depend on a number of factors, including the location and size of the tumour, the results of your lab tests, and whether the cancer has spread to other parts of your body. Your healthcare provider will modify your treatment plan to suit your unique needs. Receiving a variety of treatments is also common.

An area of healthy tissue surrounding the tumour as well as the diseased section of your breasts are removed during breast cancer surgery. Depending on your circumstances, there are various forms of surgery, including:

Before performing a lumpectomy, your doctor may advise chemotherapy for breast cancer in an effort to reduce the size of the tumour. It is sometimes given following surgery to eliminate any cancer cells that may still be present and lower the risk of recurrence (coming back). Your healthcare practitioner can suggest chemotherapy as your primary treatment if the cancer has spread from your breast to other places of your body.

After a mastectomy or lumpectomy, radiation therapy for breast cancer is frequently administered to eradicate any leftover cancer cells. Individual metastatic tumours that are hurting or producing other issues can also be treated with it.

Hormones like progesterone and oestrogen are used by some kinds of breast cancer to fuel their growth. Hormone therapy can either reduce oestrogen levels in certain situations or prevent oestrogen from binding to breast cancer cells. After surgery, hormone therapy is most frequently used by medical professionals to lower the possibility of breast cancer recurrence. However, they might also use it to treat cancer that has spread to other parts of your body or to reduce the tumour before surgery.

Immunotherapy targets and destroys breast cancer cells by harnessing the power of your own immune system. It is administered intravenously (through a vein in your arm or hand). Immunotherapy and chemotherapy may be combined by your doctor to treat breast cancer.

Some medications can specifically target cancer-causing cell traits. If your breast cancer has spread to other parts of your body, your doctor may advise you to take a targeted medication therapy. Monoclonal antibodies (such as trastuzumab, pertuzumab, and margetuximab), antibody-drug conjugates (such as ado-trastuzumab emtansine and fam-trastuzumab deruxtecan), and kinase inhibitors are some of the most popular medications used to treat breast cancer (such as lapatinib, neratinib and tucatinib).

While breast cancer cannot be completely prevented, there are several things you can do to lessen your chance of finding it when it is well advanced. For instance: