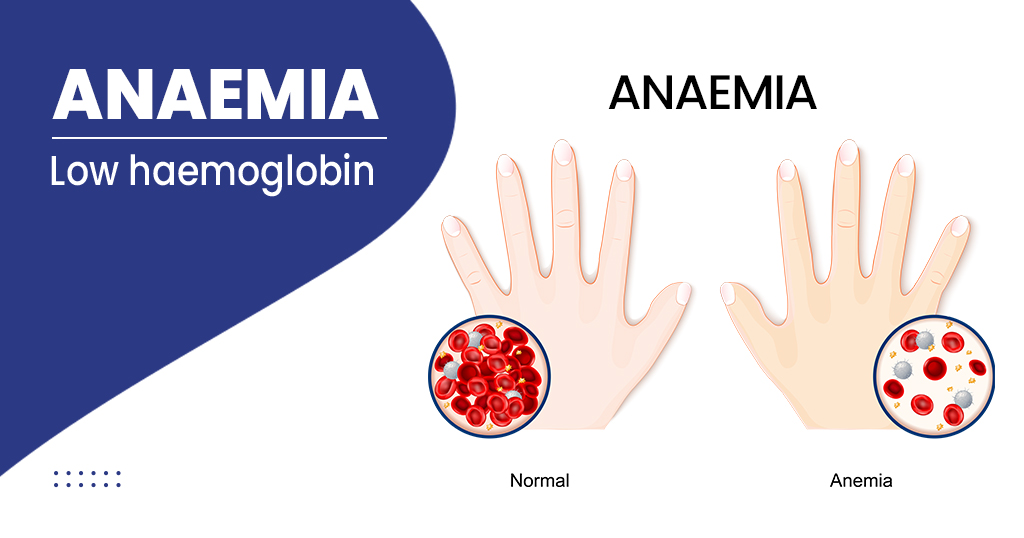 When you have Anemia, your body doesn't produce enough healthy red blood cells to supply your tissues with enough oxygen. Being anaemic, or having low haemoglobin, can make you feel exhausted and weak.

Anemia can have many different forms, each with a unique aetiology. Anemia can be mild to severe and can be short-term or long-term. Anemia typically has multiple causes. If you believe you may have Anemia, consult a physician.

Depending on the underlying cause of Anemia, treatments might range from taking supplements to receiving medical attention. Eating a healthy, diversified diet may help you avoid some types of Anemia.

When you don't have enough red blood cells or your red blood cells aren't functioning properly, you have Anemia. The body receives oxygen from red blood cells. Your cells are given energy by oxygen. Your body can't obtain the energy it needs to function if it doesn't have healthy red blood cells that do their job. While some forms of Anemia are minor and transient, others might be lifelong. Anemia could be fatal if left untreated.

How does Anemia affect the Body?

Extreme fatigue or persistent coldness are some of the common symptoms of anaemic people. Different people are impacted by Anemia in various ways:

What are the types of Anemia?

There are various Anemia forms, and each one lowers red blood cell levels.

You might not even be aware that you have Anemia because the symptoms can be so subtle. The following symptoms may be present, depending on the aetiology of the Anemia:

Other signs and symptoms of some kinds of Anemia include:

When your body doesn't have enough iron to create haemoglobin, iron deficiency Anemia develops. Red blood cells contain haemoglobin, which gives blood its red colour and helps them to transport oxygenated blood throughout the body.

Your body can't make enough haemoglobin if you don't consume enough iron or if you lose too much iron, and iron deficiency Anemia eventually sets in.

Anemia due to iron deficiency can be brought on by:

These individuals may be more susceptible to iron deficiency Anemia:

Your medical professional will enquire about your symptoms. They will perform blood tests to check on your red blood cells because Anemia occurs when you don't have enough healthy red blood cells:

Some types of Anemia, like sickle cell, haemolytic, and aplastic Anemia, cannot be prevented. People with chronic disease who are susceptible to Anemia should keep an eye out for its symptoms. A nutritious diet can also fend off nutritional Anemia.

Eating iron-rich foods can help if nutritional deficiencies are responsible for Anemia.

Some foods that are high in iron include:

Below are the related tests for Anemia